House of Hamill owes its existence - almost entirely - to a series of cancelled flights.

Rose Baldino and Brian Buchanan first found themselves onstage together at the 2014 Folk Alliance International conference in Kansas City.

Rose’s band Burning Bridget Cleary was scheduled to perform, but inclement weather prevented two of her bandmates from flying. Desperate to salvage the showcase, Rose approached Brian, who she knew fronted Canadian celtic rock band Enter the Haggis. She thrust a guitar into Brian’s hands, pulled him onstage, and the two just clicked. 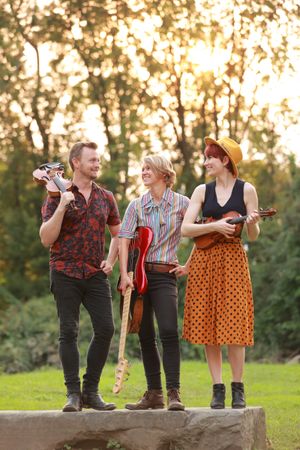 Four years and hundreds of shows later, the duo was booked to play a closing slot at a Colorado festival, so they hired a bass player and drummer to fill out their sound. By the oddest of coincidences, their hired bandmates’ flights were canceled the day of the show. A frantic Facebook post introduced Brian and Rose to local musician Caroline Browning, who joined them on bass for the weekend. Once again, the chemistry was undeniable, and House of Hamill became a trio.

Today, Pennsylvania-based House of Hamill is a fixture on festival stages across the US, and have shared their music and stories on the country’s premier folk stages. Their version of “Pound a Week Rise” rose to #1 on the US Folk DJ charts, and the video for their all-violin cover of “Sweet Child O’ Mine” amassed over 16 million views on Facebook, where it was shared over 400,000 times. Their latest release, “Folk Hero,” captures perfectly the frenetic energy and eclecticism of their always engaging live show. A lively collection of original instrumentals, reimagined folk ballads, and new songs that showcase the trio’s versatility, “Folk Hero” is the third House of Hamill album to be funded entirely by their fans.

Whether they’re ripping through a set of original jigs and reels, adding lush three-part harmonies into traditional folk ballads, or cracking up an audience with stories from the road, House of Hamill puts on a show that captivates audiences from the very first note.

Want to help us re-write our bio? CLICK HERE!!